It is hard to wrap my mind around the events of today. Chanel creative director Karl Lagerfeld has passed away. This is a statement hard to believe and something I do not want to even process. The immense sadness and crushed feeling has been lingering with many today, including myself. With extreme sadness, a realization came to me that talking about Karl Lagerfeld’s pure ingenuity and genius will now be a topic of the past. Though his legacy will always continue on, many will be feeling melancholic for his designs and wonderful attributes– including his photography skills, generosity, and his sense of humor.

When I first began to take a serious interest in fashion, my go to brand for extravagant and classic fashion, like many people, was Chanel. When you wanted to know what was going to be “next” in the fashion world, Mr. Lagerfeld always pointed us towards the light of a new age of fashion. Every season something new and beautiful would always be produced, yet no season was the same as another. He created opportunities to take fashion places it less commonly goes like in Dallas, Texas for a Métiers d’Art show and Havana, Cuba almost immediately after the country was open to visitors, and metaphorically like his recent Egyptian themed collection. Always inventive, he excelled and performed exceptionally time and time again collection after collection. Chanel, synonymous with the likes of founder Coco Chanel and Karl Lagerfeld himself, is the epitome of innovation today. The storied brand produces over five collections a year– a massive feat for any designer. More than that, Mr. Lagerfeld in his later age still was involved in the process of creating the collections daily.

Lagerfeld with his work at Chanel and Fendi has created worlds that fashion lovers alike want to envelope themselves in. He created atmospheres that only heightened the clothing, not take away from it. The massive iceberg or the waterfall or even the spaceship are representations of his pure imagination. I will yearn for his sets that give us glimpses into his mind and his reasoning behind choosing them too. I have loved seeing his innovation play out in other ways in addition to the miraculous clothing he made.

Though I did not know Karl Lagerfeld his work touched me, moved me deeply, and most of all confirmed that fashion, as beautiful and fanciful it may seem from the surface, can shock our cores and touch us all in the most indescribable ways. He often left me speechless because of the wonder of his work. How we all will miss him so. 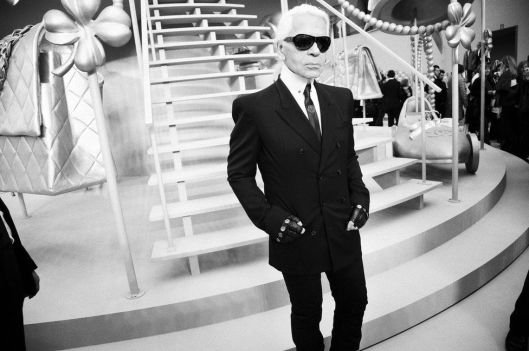